This year showed that the impact of the COVID-19 pandemic is still with us.

Data can help us understand the contours of a gun violence crisis that kills thousands of people a year and injures — both physically and mentally — tens of thousands more.

This year showed that the impact of the COVID-19 pandemic is still with us: gun deaths remain at near-record levels as communities across the country continue to struggle with both gun homicides and suicides. But 2022 was also a banner year for firearms law: Congress passed the first gun reform law in decades against the backdrop of a landmark Supreme Court ruling that expanded gun rights..

Here are some numbers that stood out to us in 2022.

The estimated number of firearm deaths, excluding suicides, in 2022

The number of gun deaths excluding suicides in 2022 declined slightly compared to 2021, a year that saw the most gun deaths on record. This total, tracked by the nonprofit Gun Violence Archive since 2014, includes murders, accidental shootings, and other homicides that law enforcement deemed legally justified.

Preliminary data from the Centers for Disease Control also showed more than 48,000 firearm homicides and suicides in 2021 for the first time. The age-adjusted gun death rate of 14.8 per 100,000 people was the highest since 1993, a high-water mark for American gun violence. [Gun Violence Archive/The Trace] 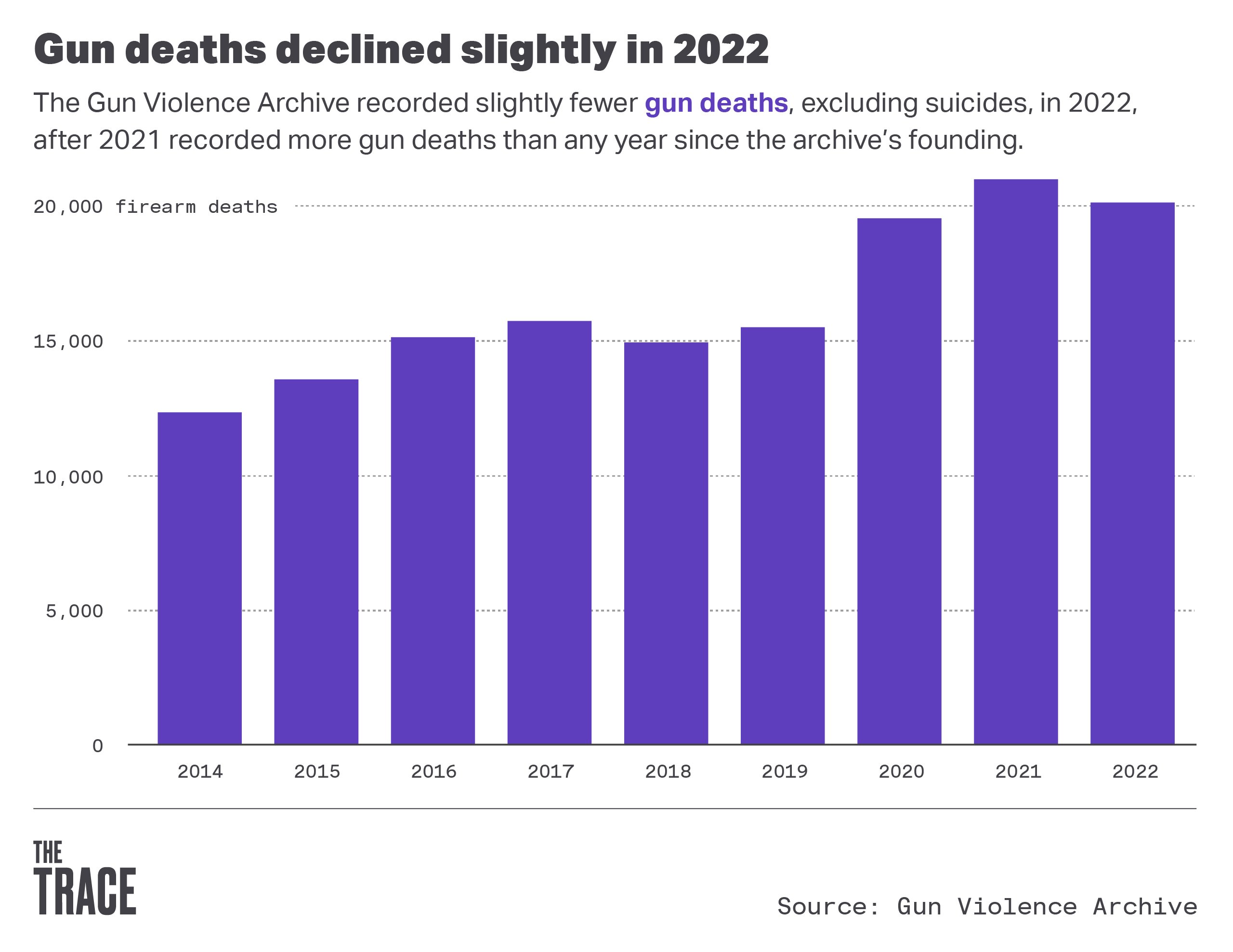 The vote of the U.S. Supreme Court in the landmark case New York State Rifle and Pistol Association v. Bruen

For the first time, the court recognized an individual right to carry loaded guns in public. The June ruling forced a half dozen states with more restrictive standards around who can carry guns in public to loosen their permitting rules. It also upended the constitutional test previously used by lower courts to evaluate cases involving gun restrictions and replaced it with one that is structurally more favorable to gun rights arguments. [The Trace]

Gun dealers are required to seek a Federal Firearms License from the federal government. Licensees are required to conduct background checks on all gun sales and keep detailed records. The number of federally licensed gun dealers has increased by 2,000 registrations in the last five years. [Bureau of Alcohol, Tobacco, Firearms and Explosives]

From 2011 to 2020, the suicide rates among Black, Latino, and Asian teenagers each more than doubled, according to a February 2022 analysis of Centers for Disease Control data by The Trace. Historically, victims of firearm suicide have tended to be older, white males living in rural areas. That remains true, but The Trace’s analysis showed that those disparities are narrowing as suicide rates among young Black and brown people worsen. [The Trace]

The number of guns Americans bought in 2022

It was the second yearly decline since 2020, when gun sales hit record highs amid concerns over COVID-19, protests against racial injustice, other social unrest, and the 2020 presidential election. Gun sales typically spike during presidential elections and major social events. However, gun sales have not declined uniformly. In Oregon, for example, gun sales hit record highs in November after voters approved a ballot referendum that will require permits to purchase any firearms and ban high-capacity magazines. [The Trace] The number of mass shootings in 2022 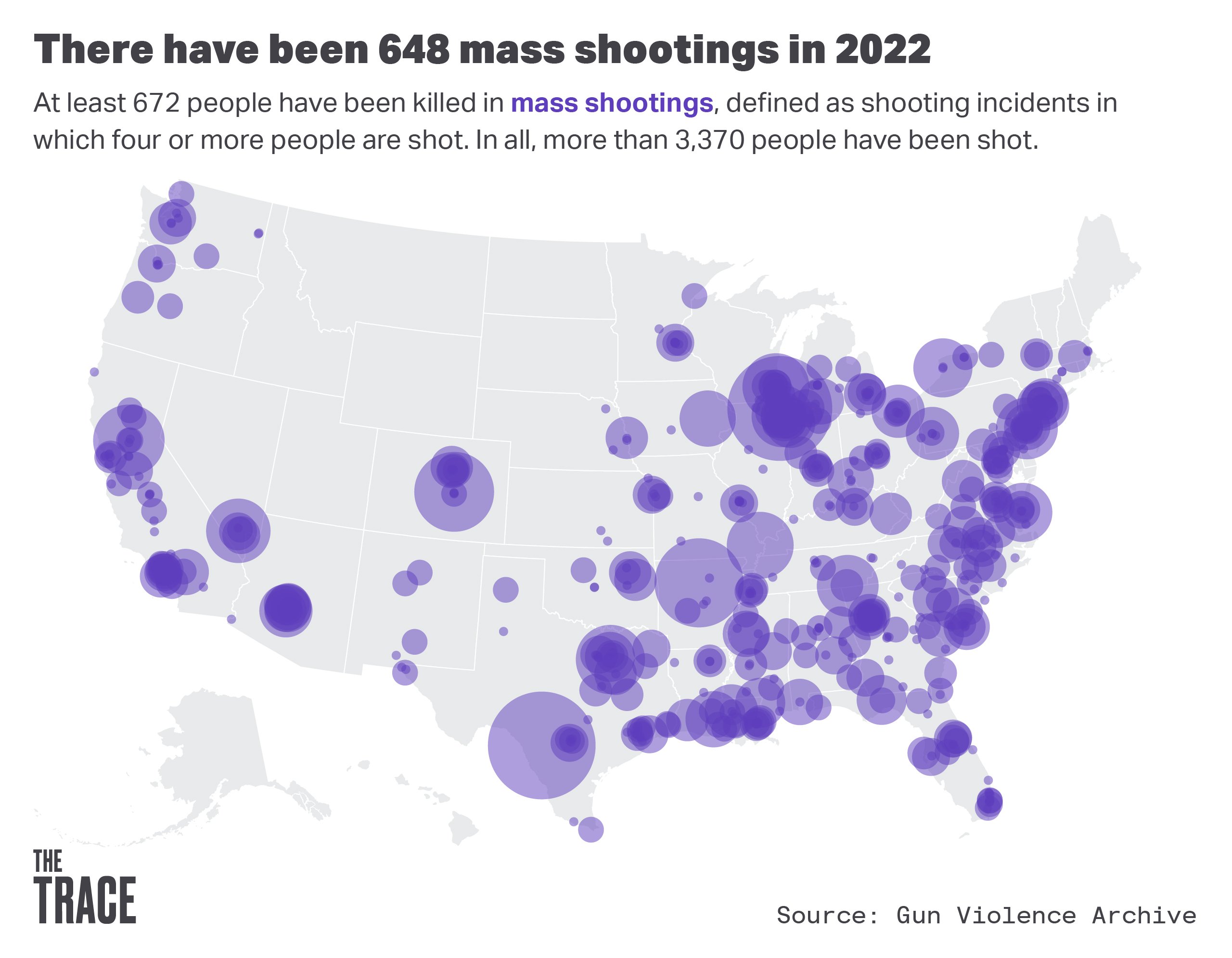 The number of people shot on school property increased 46 percent in 2022. The number of incidents increased 21 percent, to a total of 302. Both figures are records, according to the K-12 School Shooting Database. This database includes all gun violence incidents on school properties, including shootings at sports games, suicides, fights that escalate into shootings, and accidents. [K-12 School Shooting Database]

The number of people shot and killed by police in 2022

Police have killed the highest number of people on record in 2022, surpassing the 2021 record, when police killed 1,047 people. The number of people shot and killed by police in the United States has remained relatively stable at around 1,000 people annually, though the total has risen slightly in recent years. [The Washington Post]

This total is listed as “at least” because transgender and non-binary people are often misgendered and their deaths undercounted. At least two trans people included in this total, Daniel Aston and Kelly Loving, were shot and killed in the Club Q mass shooting in Colorado Springs. [Human Rights Campaign]

Only law enforcement and close family and household members are allowed to petition for red flag orders, known as Emergency Risk Protection Orders in Colorado. If granted, the orders allow law enforcement to temporarily seize guns from a person who presents a danger to themselves or others.

In November, after a man who displayed clear warning signs carried out a mass shooting at Club Q in Colorado Springs, we started looking at local officials’ use of the law. Data shows that between late 2020 and November 2021, only eight red flag petitions were approved in El Paso County. All of them were filed by family and friends. Local law enforcement, which vocally opposed the red flag law, filed zero. [Colorado Judicial Department/The Trace/9NEWS Denver] Chip Brownlee twitter email
Chip is a reporter at The Trace covering federal policy related to violence prevention and firearms. Before joining The Trace as an investigative fellow in June 2020, Chip worked as a reporter and the editor-in-chief of his collegiate newspaper, The Auburn Plainsman. He also covered the state legislature, governor, courts, and elections for the Alabama Political Reporter. As an undergraduate, Chip studied political science and journalism at Auburn University. He also earned an M.A. with a concentration in politics from the Columbia Journalism School.