CDC Data Captures a Surge in Gun Murders, While Other Homicides Are Stable

Hello, readers. In today’s briefing: Several updates to the Maria Butina case, including the identity of “U.S. Person 2” in court documents. Plus, one man’s tribute to shooting victims is a reminder of the toll of everyday gun violence. Those stories and more, below.

Four U.S. senators are requesting information on an NRA delegation’s 2015 trip to Russia. Senators Ron Wyden, Sheldon Whitehouse, Elizabeth Warren, and Richard Blumenthal sent a letter on Thursday to several people involved with the trip, which was hosted by accused Russian agent Maria Butina’s gun rights group. The senators are asking those addressed to “identify and describe any interactions you had with Mr. [Alexander] Torshin or Ms. Butina on the December 2015 trip in question, and provide all related documentation, including e-mails and other correspondence” by August 9. The National Rifle Association has received a handful of letters from Senator Wyden in recent months, but as The Trace’s Mike Spies points out, this one turns the spotlight to big donors who typically fly under the radar.

About that junket: It put NRA leaders in touch with the wife of Butina’s billionaire backer. The Guardian reports that high-ranking members of the American gun group met with Svetlana Nikolaeva, the head of a gun company with Russian military and intelligence contracts, during their 2015 trip to Moscow. Nikolaeva is married to Konstantin Nikolaev, a Kremlin-linked billionaire who allegedly provided funding to Butina.

‘U.S. Person 2’ in the Butina case has been identified. Interviews and public documents obtained by the Wall Street Journal reveal that George O’Neill Jr. is the person described in court documents as hosting a private dinner with Russian dignitaries and American conservatives, which Butina attended, in 2017. O’Neill is a Rockefeller heir, conservative columnist, and NRA shooting instructor who praised President Trump’s meeting with Russian President Vladimir Putin earlier this month.

Russia’s Foreign Ministry calls Butina a “political prisoner.” At a briefing on Thursday, a spokesman criticized the arrest and demanded Butina’s release. He explained: “Her arrest is motivated solely by the motives of the U.S. domestic and foreign policy, and therefore she is a political prisoner.”

New Jersey to 3-D gun company: “drop your publication plans.” On Thursday, the state’s attorney general sent a cease-and-desist letter to Defense Distributed, the 3-D printed gun company at the center of a legal controversy. The letter threatens to sue the company if it posts the files. ICYMI: In yesterday’s newsletter, we recapped other efforts underway to short-circuit the anarchist gun activist and inventor who hopes to usher in an age of downloadable firearms.

Gun traces increased by 11 percent in 2017, according to federal data released this week. The Bureau of Alcohol, Tobacco, Firearms, and Explosives says the year-over-year jump indicates increased participation by law enforcement in federal tracing programs. These programs are designed to help police identify the custody of a firearm through the supply chain, from manufacturer to dealer to buyer. Explainer: Here’s how gun traces are supposed to work, and where they hit roadblocks.

Gun murders jumped between 2014 and 2016, according to a Centers for Disease Control analysis. In the same period, other methods of homicide, including those involving knives and suffocation, remained flat. Public health experts attribute the spike to rising gun violence in some American cities. Here’s the chart the CDC included in its brief: 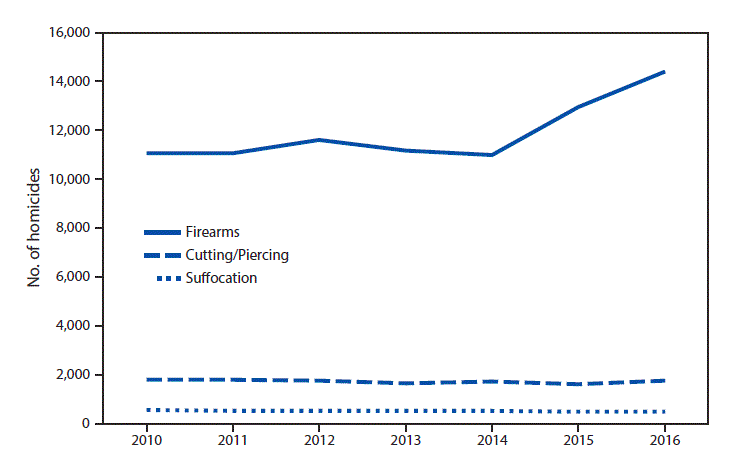 In Democratic primaries, candidates are putting gun reform front and center. Lucy McBath, who became a gun reform activist after her son was fatally shot by a white man during a dispute over loud music, won her Democratic Congressional primary in Georgia on Tuesday. She’s part of a wave of candidates across the country campaigning on the issue during this year’s midterm elections. According to Roll Call, Democratic candidates in at least three different districts are running television ads related to gun violence.

The chances of a red flag law in Texas are looking increasingly slim. Lieutenant Governor Dan Patrick, who leads the state Senate, said this week that he would not support legislation that allows family or law enforcement to petition for the removal of guns from people in crisis. Governor Greg Abbott had signaled that he would be open to a red flag law after the Santa Fe school shooting, but has declined to endorse such a measure.

Seattle is considering more new gun measures. The reform package, introduced Tuesday, includes a requirement for warning signs outside of gun shops and shooting ranges, a gun storage mandate, a requirement for law enforcement to destroy confiscated weapons, and the creation of a group to develop gun safety programs.

A community ceasefire in Kansas City, Missouri, is calling for peace. Today, Operation Cease Fire KC kicks off its third annual violence-free weekend. For 48 hours between Friday evening and Sunday evening, organizers are asking for city residents to pause all violent crime. The community-led initiative hopes to replicate the success of Baltimore’s community ceasefire, which resulted in 12 days without a single homicide earlier this year.

A gun range employee accidentally shot a co-worker. The 28-year-old man in San Antonio, Texas, was hit in the chest by a bullet on Wednesday while discussing tactics behind the counter with a fellow employee who accidentally discharged a gun. The man was taken to a nearby hospital, where he is in critical condition.

Marlon West has done more than 8,100 push-ups this year. Seventeen of them were for the people killed at Marjory Stoneman Douglas High School in February. Five were for the newspaper employees killed at the Capital Gazette last month.

Thousands more were for the shooting victims who never make the national news.

Elizabeth Van Brocklin spoke with West about his project: a push-up for every person killed by gun violence in America in 2018, each one videotaped and posted online. “These videos are a way of sparking awareness and discussion that hopefully leads to making a dent in the body count,” West says. Read what he’s learned in the process, here.