The Federal Government Is About to Spend $750 Million on Crisis Intervention. Will It Help Reduce Gun Violence?

A new law was supposed to exclusively fund states that have, or plan to pass, red flag laws. But a compromise broadened the criteria, complicating how to prioritize programs shown to decrease shootings.

Kelly Moller, a Democratic state representative in Minnesota, is conflicted. Like every other state, hers is preparing to receive new federal funding for crisis intervention. But with a wide slate of options for using the funds, and relatively vague federal guidance, she isn’t exactly sure where the state should start.

The Bipartisan Safer Communities Act, which President Joe Biden signed in June, gives states $750 million over five years to implement or improve a range of crisis intervention programs. The possibilities are broad: Available funding could cover Extreme Risk Protection Order laws, more commonly known as red flag laws, which allow courts to temporarily seize firearms from people who pose an immediate danger to themselves or others. Initiatives like mental health courts, veterans courts, and drug courts may also qualify.

But the federal government hasn’t yet specified exactly how it will distribute the funding this fall, nor exactly what states should use it for, making it hard for states to prioritize their options. And the broad eligibility raises questions about whether the bulk of the funding will specifically address gun violence.

In Minnesota, Moller is a longtime prosecutor in addition to her statehouse position. She’s seen the benefits of court diversion programs, which offer long-term treatment with court supervision as an alternative to incarceration, typically with the goal of reducing reoffending. These kinds of programs are eligible for the new federal funding and could be a way for Minnesota to apply them in the hopes of improving public safety.

The Minnesota state Legislature, split between a Republican-controlled Senate and a Democratic-controlled House, hasn’t approved a red flag law. In 2020, Moller co-sponsored red flag legislation that passed the House, but died in the Senate. And during the last legislative session, Moller was the main sponsor of another red flag bill, which didn’t make it out of committee.

The federal law, Moller said, puts Minnesota between a rock and a hard place. Ultimately, it provides a finite amount of funding, and if the state uses it for diversion programs, it may not be there to support a red flag law if the Legislature eventually passes one. But if the state doesn’t use it for the court diversion programs and doesn’t pass a red flag law, it could miss out on the extra funding altogether.

“In the grand scheme of things, those [diversion] courts are extremely helpful,” Moller said. “But they don’t deal with the immediate problem of someone who’s threatening to harm themselves or others and can easily access guns.”­­­­

Moller’s internal struggle over what to do with the money reflects a larger debate that began during this summer’s Senate negotiations over the Safer Communities Act. After a week of intense negotiations, the bipartisan group of U.S. senators working on the bill reached an impasse over the degree to which the federal government should be prescribing, or incentivizing, red flag laws. Democrats wanted to make funding specifically available to states that already had, or those that would pass, such statutes. But Republicans, some of whom have opposed red flag laws, didn’t want to exclude states that don’t want them.

Eventually, the group came to an agreement: They allowed every state to qualify for the funding, and instead of creating discrete incentives for passing or improving red flag laws, they bolstered a variety of crisis intervention and diversion programs, some of which aren’t necessarily equipped or intended to specifically address gun violence. States that choose not to implement red flag laws won’t get less money.

The Senate ultimately passed the bill in June, followed by the House. Biden signed it into law on June 25. The first tranche of funding — $135 million — will be distributed through the DOJ’s new Byrne State Crisis Intervention Program. The Bureau of Justice Assistance, the DOJ office administering the program, hasn’t yet posted solicitations for the formula funding, though it’s expected to do so in the next couple months.

At least 19 states already have red flag laws in place. These states are likely to use the funding, in whole or in part, to bolster their existing red flag processes. States without such laws now have multiple options for using the funding regardless of whether they pass red flag legislation, including mental health courts, drug courts, and veterans courts. 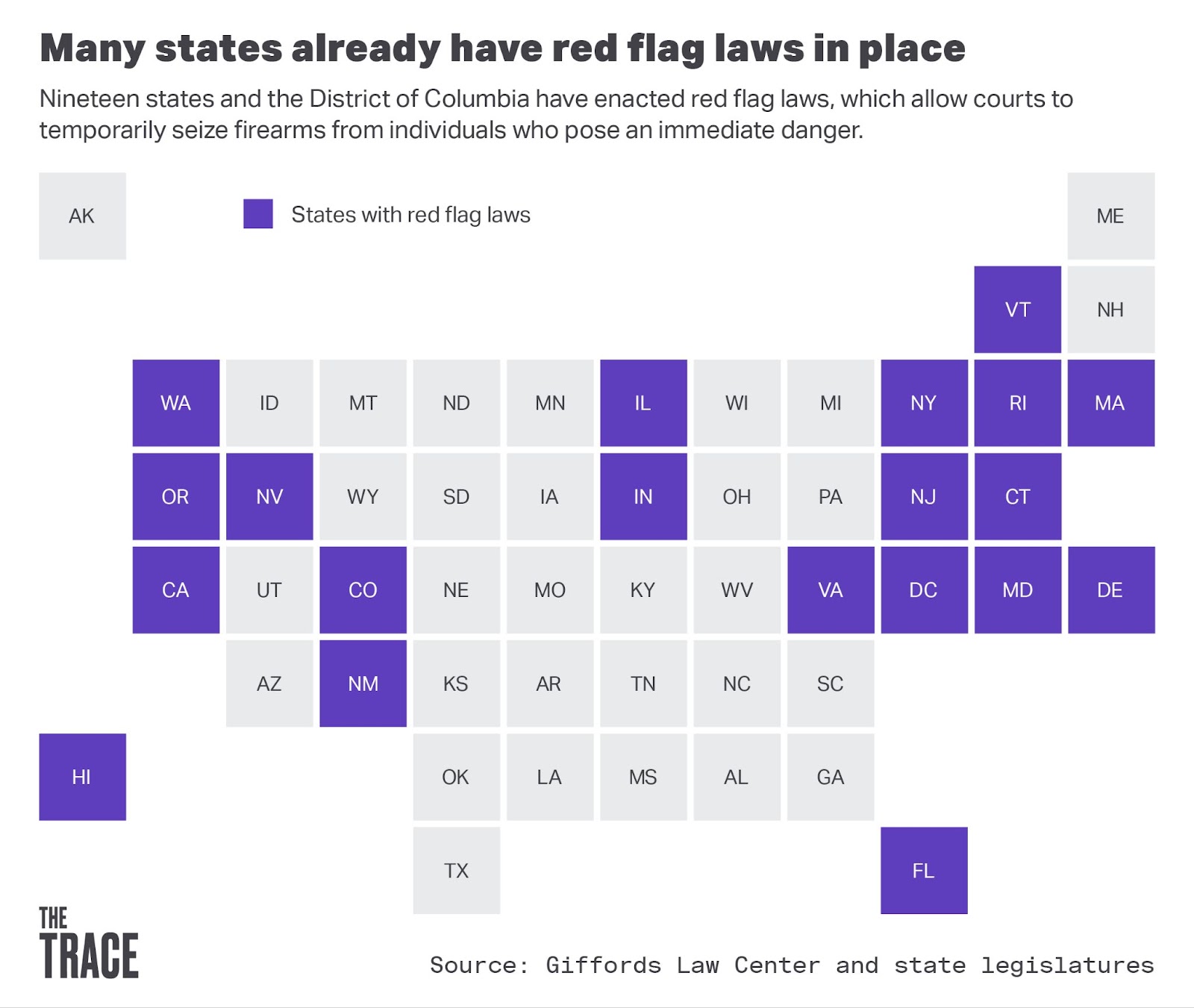 “It does matter to states to have a law that explicitly says they can use the funding [for red flag laws],” said Lindsay Nichols, federal policy director at Giffords, the gun reform advocacy group. “Regardless of whether the effect ends up being to incentivize states to pass laws, this law will help reduce gun violence because it will encourage states that have these laws to make them effective.”

Several governors, attorneys general, and state lawmakers contacted by The Trace said that, until the DOJ releases specifics about distributing the funding, it is too early to know exactly how they’ll use it.

In Florida, which already has a red flag law, every county has its own procedures for handling a risk protection order, from filing petitions to arguing for the order in court. That makes distributing the new funding even harder.

“A lot of the money that you need for a red flag law is in the implementation phase,” said Florida state Senator Lori Berman, a Democrat who represents Palm Beach County. “They have attorneys who to go to court, who have to know how to fill out the risk protection order, how to present it to the judge. They have people who have to be trained.”

Only law enforcement can file for risk protection orders under current Florida law. Berman, who first sponsored a version of the state’s red flag law in the Legislature before the 2018 Marjory Stoneman Douglas High School shooting prompted lawmakers to pass one, said she wants to expand the law to allow family members to file for risk protection orders, as well as to increase public awareness.

“Because they can’t file directly, it’s harder to make the community aware and let them know there is this resource,” Berman said.

The new funding could be used to educate the general public about the laws, and to put procedures in place to train law enforcement officers, court personnel, health care professionals, and lawyers on how to pursue protection orders.

“All of those things need to happen for an extreme risk protection law to actually work,” Nichols said.

While Democrats at the federal level have embraced red flag laws more than Republicans, the measure’s future will depend on buy-in from state leaders of both parties. Currently, six states with Republican governors, including Florida and Maryland, have red flag laws on the books. While some proponents hope the federal funding will encourage others to pass new laws, many are taking a wait-and-see approach.

“Until we know with more specificity what types of programs could qualify for funding, we cannot speculate on potential funding uses,” Dan Tierney, press secretary for Ohio’s Republican governor, Mike Dewine, said. Ohio doesn’t have a red flag law, though a Republican state lawmaker recently introduced one.

In New Hampshire, another Republican-led state, officials are doing a similar calculus to Moller in Minnesota. Every state has at least one drug court, according to the National Drug Court Resource Center, and similarly most states have mental health courts. But these diversion programs are typically operated by local courts, and they aren’t always present in every jurisdiction in a state. On top of that, a person typically needs to be charged with a crime before a diversion program becomes an option.

While some of those programs may ultimately result in a person being prohibited from possessing firearms, they don’t necessarily provide family or law enforcement means to quickly and directly petition a court for their removal. But they can still help reduce gun violence.

“We may be able to save people through a great program like drug court, veterans court, mental health court, before they get to the point where they are contemplating using a firearm to end all of it,” said Debra Altschiller, a Democratic state representative in New Hampshire who was the prime sponsor of a red flag law that was vetoed by the state’s Republican governor, Chris Sununu, in 2020. “There’s no reason we can’t help from both angles.”

Sununu’s office did not respond to an interview request.

New Hampshire, like 45 other states, will hold legislative elections in November, which will factor into how states use the funding. Altschiller said she is hopeful that the election will result in candidates getting elected who will support a red flag law in her state.

Chip Brownlee twitter email
Chip is a reporter at The Trace covering federal policy related to violence prevention and firearms. Before joining The Trace as an investigative fellow in June 2020, Chip worked as a reporter and the editor-in-chief of his collegiate newspaper, The Auburn Plainsman. He also covered the state legislature, governor, courts, and elections for the Alabama Political Reporter. As an undergraduate, Chip studied political science and journalism at Auburn University. He also earned an M.A. with a concentration in politics from the Columbia Journalism School.