The facts and figures that stuck with us.

Since the start of the pandemic in 2020, we’ve had our eyes glued to screens, staring at a constant stream of numbers. It can be overwhelming, and it’s easy for complicated data to lose meaning. But good data enables us to clearly see the details of America’s gun violence epidemic like nothing else.

Below, we’ve shared some of the facts and figures that stood out from the noise. They highlight the human cost of gun violence, they give us a better understanding of who owns firearms, and they help make sense of the remarkable increase in shootings our nation continues to endure.

The number of gun deaths, excluding suicides, so far in 2021.

The total includes murders, accidents, and homicides that were ruled justifiable. It’s a slight increase over the total in 2020 and a continuation of the trend of rising gun deaths that accelerated during the pandemic. The annual total is the highest recorded by the Gun Violence Archive since the nonprofit’s founding in 2014. [Gun Violence Archive] The number of mass shooting incidents in the United States in 2021.

The share of major cities that have seen more homicides this year than in 2020.

When gun violence began to surge during the pandemic, cities saw their homicide rates soar, and in many of the country’s most populous cities, that trend has continued into 2021. Though there are signs the rate of increase has slowed, at least nine of the country’s major cities have broken previous homicide records this year, according to a CNN analysis of 40 cities. [CNN]

The estimated number of guns sold in 2021.

The number includes 11.3 million handguns and 7.5 million long guns. Based on data from the National Instant Criminal Background Check System, gun purchases have declined in 2021 compared to 2020. Even still, this year remains on track to record the second-highest number of estimated guns purchased since 2000. [The Trace] 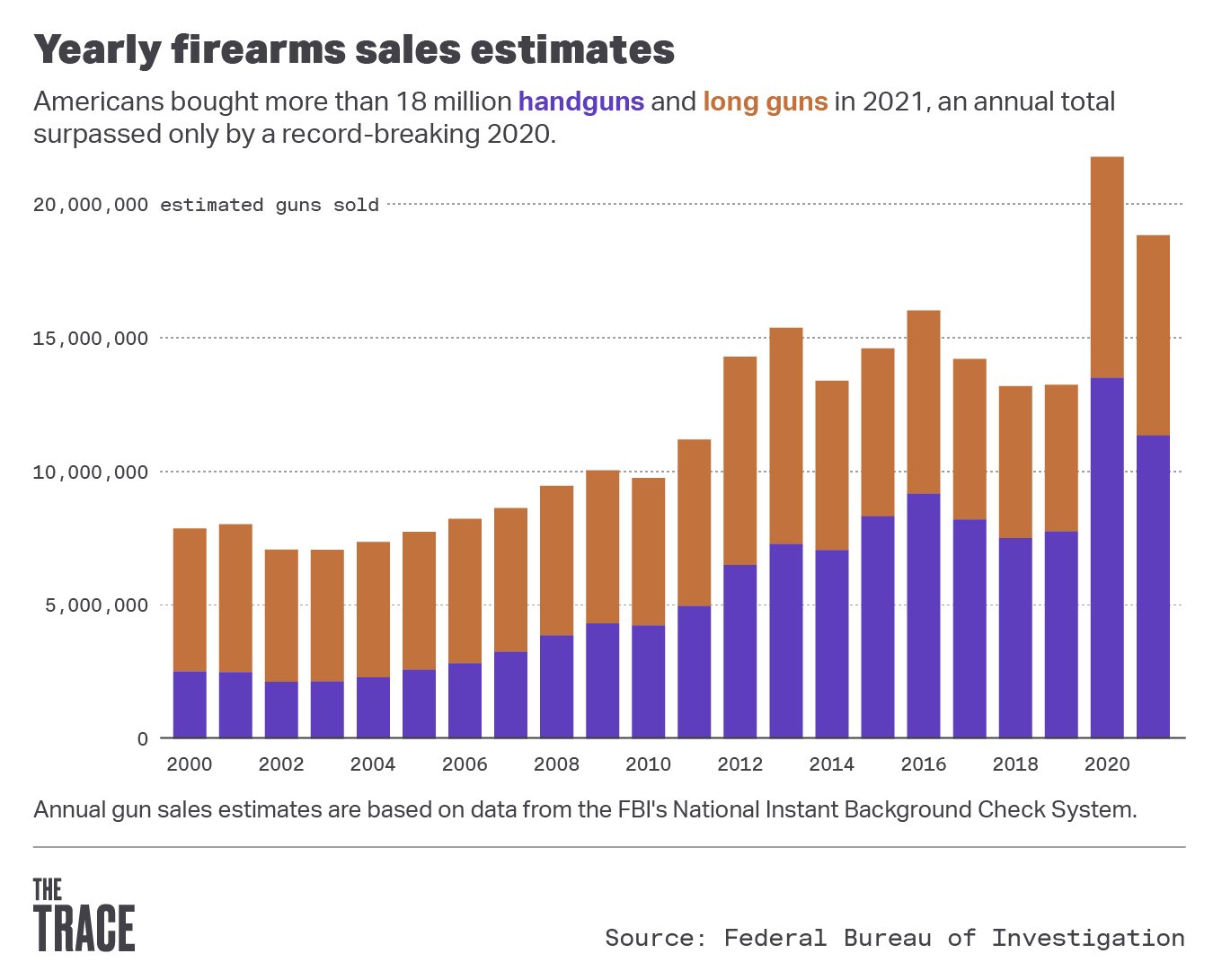 The estimated number of adult Americans who own a firearm.

Americans are the most heavily armed citizenry in the world, and this estimate from the 2021 National Firearms Survey shows that about one-third of U.S. adults own a gun. A study based on the survey’s data showed that an estimated 7.5 million U.S. adults became new gun owners between January 2019 and April 2021. During that time period, an estimated 17 million people found themselves in a home with a firearm where there wasn’t one before. [2021 National Firearms Survey] The share of gun dealers with violations whose licenses were revoked between 2010 and 2019.

In a sweeping investigation, The Trace showed that the Bureau of Alcohol, Tobacco, Firearms and Explosives goes easy on wayward gun dealers. The agency routinely downgraded punishments for dealers who were found to be breaking the law, and revoked licenses in only the most egregious cases. [The Trace/USA Today]

The number of people killed in school shooting incidents in 2021.

At least 80 others have been injured. This year’s total amounts to the most casualties from school shootings since 2018, the year a gunman killed 17 people at Marjory Stoneman Douglas High School in Parkland, Florida, and another killed 10 at Sante Fe High School in Texas. [Gun Violence Archive]

The number of guns recovered from crime scenes in 2020 that had been purchased less than seven months earlier.

Guns sold in 2020 were more likely to show up at crime scenes within a year than in any previous period, according to “time-to-crime” figures published by the Bureau of Alcohol, Tobacco, Firearms and Explosives. It’s some of the first evidence to suggest that the surge of gun purchases in 2020 is connected to rising gun violence. [The Trace]

How many ghost guns the NYPD has recovered in New York City through November.

The number surpassed the 145 the Police Department recovered last year and far exceeded the 48 seized in 2019. Law enforcement agencies across the country are increasingly finding these unserialized, difficult-to-trace firearms at crime scenes, a trend The Trace has reported on for years. [Gothamist]

The amount of funding earmarked for community violence intervention in the Build Back Better bill.

The funding in the current version of President Joe Biden’s social spending bill, which is currently stuck in the Senate, would go to the Department of Justice and Centers for Disease Control and Prevention to invest in community violence interventions. These evidence-based programs, like Cure Violence and Advance Peace, among others, have been shown to help reduce violent crime. According to a 2021 survey from Giffords Law Center, some 86 percent of community violence intervention workers worry frequently or occasionally about losing their jobs because of a funding lapse. Separately, the American Rescue Plan, the president’s COVID-19 relief bill, included more than $350 billion in state and local funding that could be used on CVI. [White House]

The number of states that have passed permitless concealed carry laws in 2021.

Iowa, Tennessee, Texas, Arkansas, Montana, and Utah all passed permitless carry laws this year, the most states in a single year to do so. In total, 21 states have laws allowing residents to carry concealed handguns without a license An estimated 20.7 million gun owners say they carry their firearms under concealed carry laws. [The Trace/2021 National Firearms Survey] 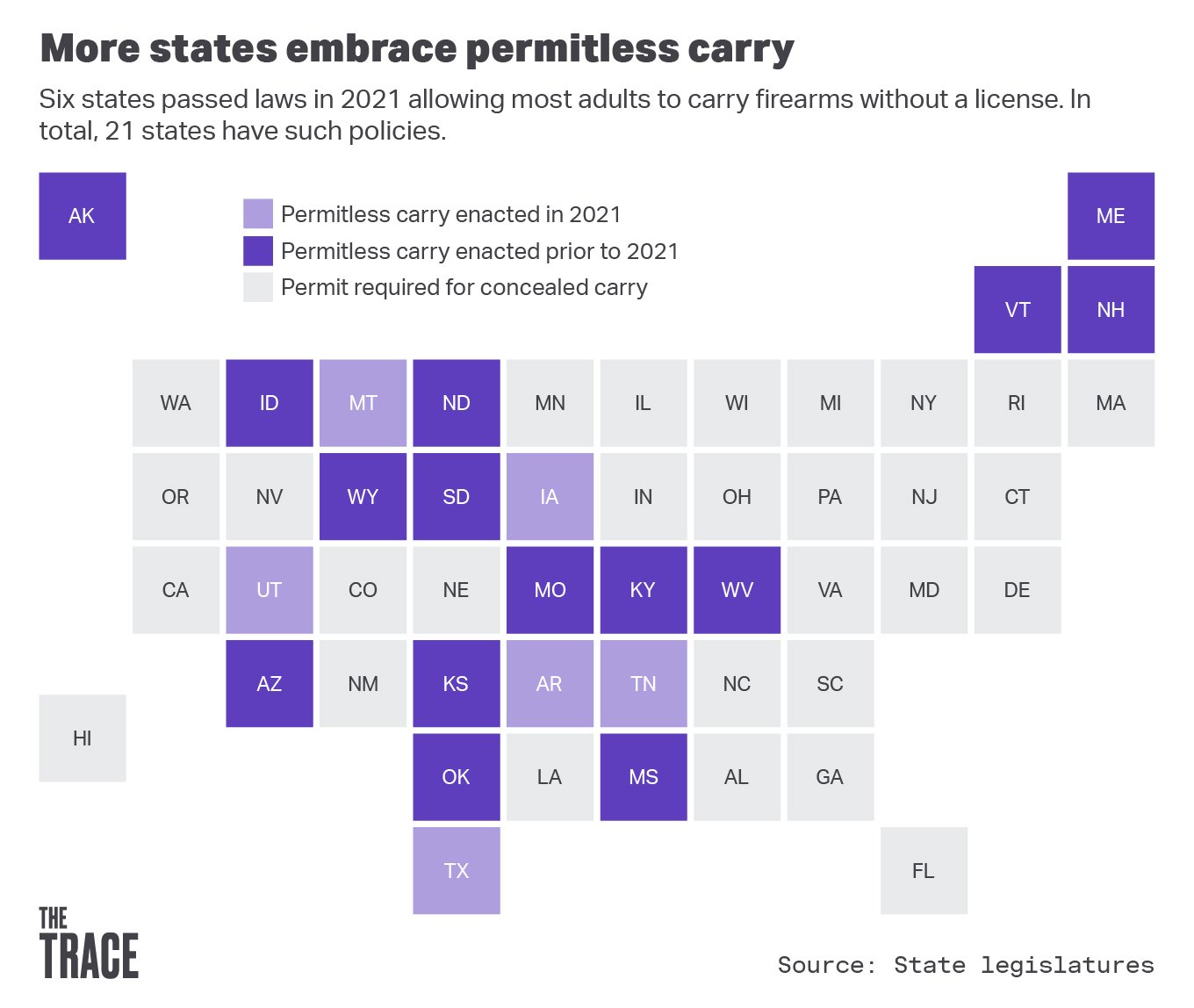 The rate of gun suicide in the United States.

The U.S. has the highest gun suicide rate of any country on earth. In terms of raw numbers, it works out to roughly 24,000 deaths per year — nearly 70 percent of all annual gun deaths. According to preliminary data released in November, the overall suicide rate declined slightly in 2020. [The Trace/Institute for Health Metrics and Evaluation]

The number of transgender and gender non-conforming people who have been killed in 2021.

Most of the homicides were committed with guns, and the majority of the victims were Black and Latinx women. The number is likely an undercount, but it is still the most on record, surpassing 2020’s record of 44. Transgender deaths often go unreported or misreported because the victims may be misgendered or deadnamed by law enforcement, media reports, or next of kin.  [Human Rights Campaign]

Become a Member
Chip Brownlee twitter email
Chip is a reporter at The Trace covering federal policy related to violence prevention and firearms. Before joining The Trace as an investigative fellow in June 2020, Chip worked as a reporter and the editor-in-chief of his collegiate newspaper, The Auburn Plainsman. He also covered the state legislature, governor, courts, and elections for the Alabama Political Reporter. As an undergraduate, Chip studied political science and journalism at Auburn University. He also earned an M.A. with a concentration in politics from the Columbia Journalism School.

The Most Memorable Gun Violence Journalism of 2021

Stories that inspired us, and improved our understanding of a uniquely American crisis.

Team Trace
The Most Memorable Gun Violence Journalism of 2021