Since The Trace launched last year, we’ve become intimately familiar with the obstacles to reporting on a subject that’s been largely shielded from public view. Compared to other areas of study, there’s very little research on gun violence, particularly at the federal level. That issue is compounded by a lack of coverage: few newsrooms have the budgets for the data-heavy deep dives that help fill the knowledge gap.

We’re hungry for the data that can help us better understand gun violence in America, and when we find something that informs our thinking, we are eager to share it with our readers. Here are 10 facts and figures that helped shape our reporting this year.

01
Sixty-three percent of all gun owners say one of the primary reasons they own a firearm is for protection against people. In September, The Trace and the Guardian obtained an advance copy of a survey that offers the most comprehensive picture of American gun ownership in more than two decades. Among its key findings: a majority of America’s estimated 55 million gun owners cite self-protection from other people as a primary reason for owning a firearm. That’s a significant shift from 1994, the year of the last comparable research, when 46 percent cited protection as the principal reason for gun ownership.

When people buy firearms with self-defense in mind, they want something that is compact, powerful, and portable. As the graphic above shows, most of the 70 million firearms added to the civilian gun stock in the last two decades were handguns.

02
83 percent of criminal offenders in Chicago cited self-defense as their primary motivation for carrying a gun.

This fall, Michael Sierra-Arévalo, a doctoral candidate in sociology at Yale University, set out to examine the link between gun ownership and what academics call “legal cynicism” — the view that the criminal justice system is unfair and ineffectual. Sierra-Arévalo examined data from a 2006 survey of 141 people who were on probation or parole for a violent crime in Chicago.  He found that cynicism about the effectiveness of law enforcement and the courts is strongest in poor, minority neighborhoods where rates of violent crime are high. As a result, criminal offenders said they were obtaining guns for the same reason as law-abiding gun owners — to protect themselves against other people who might do them harm.

03
290 per 100,000: the homicide rate in the Greater Ville neighborhood of St. Louis — more than three times that of Honduras, the world’s murder capital. 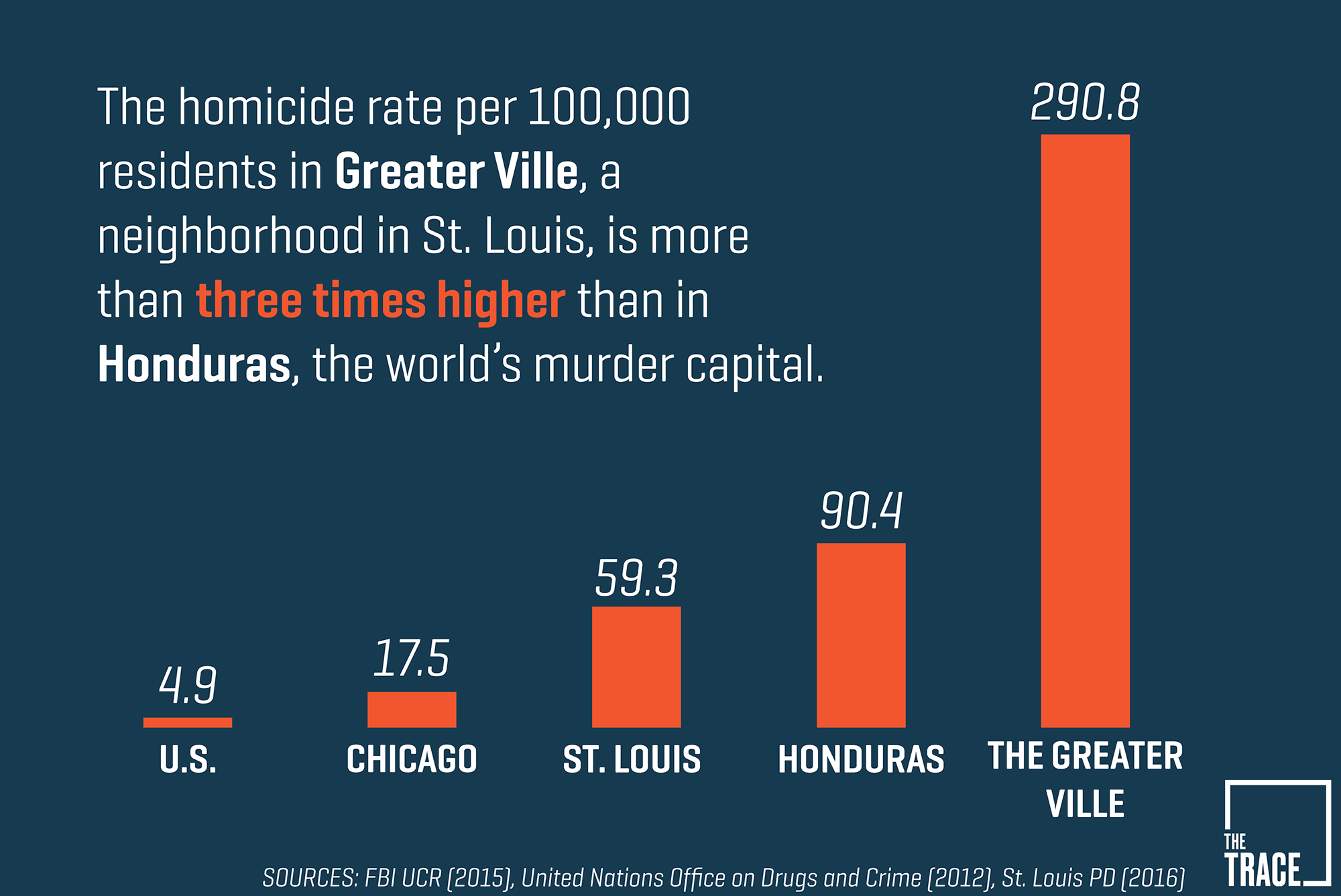 It’s impossible to discuss gun violence in 2016 without mentioning Chicago. The city’s staggering levels of violence — more than 4,000 shootings, and nearly 800 homicides — account for nearly half of the projected 14 percent increase in overall homicide rates in the county’s 30 largest cities, according to a report released by the Brennan Center, a left-leaning think tank.

A closer look at the data, however, reveals that other cities experience gun violence more acutely. Last year in St. Louis, the murder rate was 59.3 per 100,000 residents — more than three times Chicago’s during the same period. The disparity widens when  the focus is on the neighborhood level: the risk of being murdered for a person living in Greater Ville, a community in north St. Louis, is five times higher than for the average person citywide. In 2014, 64 percent of St. Louis’s murders occurred in just eight of the city’s 28 wards, the St. Louis Post-Dispatch calculated. These statistics show what The Trace calls “murder inequality”: the concept that violence is not spread evenly throughout cities. Instead, it clusters in relatively small geographic areas.

04
An estimated 4.5 million women have been bullied with guns by abusive partners.

At least 6,875 people were fatally shot by romantic partners from 2006 to 2014, according to FBI and state crime data analyzed by the Associated Press. Eighty percent of those victims were women. That works out to 554 fatal shootings of American women by a current or former romantic partner each year during the nine years examined, or, one every 16 hours.

But a firearm does not have to discharge for it to play a critical role in domestic violence. Intimate partners also use guns to threaten and intimidate. The first systematic review of the nonfatal use of firearms in domestic violence found that an estimated 4.5 million women have been bullied with a gun, Marcia Ewing reported for The Trace. Researchers call this behavior, which can be a precursor to violence, “coercive control.”

05
America’s gun homicide rate is 25 times higher than those in other comparable nations. The United States experiences more gun violence than its economic peers — by a significant margin. Using data from the the World Health Organization, researchers found that America accounted for 82 percent of all firearm deaths among 23 comparable nations in 2010. Ninety percent of women killed by guns in the study were in the U.S., as were 91 percent of children under 15.

Source: University of Nevada-Reno and Harvard School of Public Health

Because of lax reporting requirements, no one knows for sure exactly how many guns are stolen each year. But one estimate, by researchers at Harvard and Northeastern universities, is that the number is as high as 600,000. That works out to about one every minute.

Stolen guns, by definition, end up in the hands of criminals. Many later turn up at crime scenes. And as The Trace’s Brian Freskos reported, the number of guns swiped from vehicles is on the rise in many major American cities. Atlanta police recorded more than 800 reports of firearms stolen from cars and trucks in 2015, more than twice as many as five years before. Georgia is one of several states that has loosened restrictions on carrying guns in vehicles, and has made it easier to lawfully leave them there while their owners are at work.

07
41 percent of Americans think the country has universal background checks, and they are 100 percent wrong.

Nearly half of 1,384 people polled in a national survey said they believe federal law requires criminal background checks on all gun sales, including those between private parties. In fact, the Brady Handgun Violence Prevention Act, enacted in 1993, only requires background checks on sales conducted by licensed dealers. Last year, The Trace obtained preliminary results from a forthcoming Harvard study showing that roughly 40 percent of gun owners obtained their most recent firearm without a background check.

08
141 children died in unintentional or accidental shootings last year — nearly twice as many as reported by the Centers for Disease Control and Prevention.

This fall, two of the county’s biggest newsrooms analyzed child shootings stretching back to 2014 and found that the CDC had missed most of them. The reason: The CDC relies on information recorded on death certificates. The health agency said its numbers may be off because coroners frequently misclassify unintentional deaths. The news outlets, which published an exhaustive analysis of child shooting data in October, relied on figures from investigating agencies.

In October, The Trace examined a slightly different category of shootings: those carried out by children under the age of 13. We found that between September 1, 2014 and September 1, 2016, at least 295 young children shot someone, resulting in 102 deaths and 198 injuries.

Mass shootings, like the massacres at the Pulse nightclub in Orlando, dominate news coverage when they happen. But high-casualty shootings happen far more often than the public is aware of. From news reports, the nonpartisan data-crunchers at Gun Violence Archive, and law enforcement officials, the Times counted 358 shootings in which four or more people were injured or killed in 2015 — nearly one a day, on average. The typical victim was a black male between the ages of 18–30.

[Photo: Kyle Grillot for The Trace]