Gun owners in the Arizona desert have begun using Civil War-style photos of themselves for target practice as part of an ongoing project that a photographer hopes will challenge notions about firearms ownership.

Kari Wehrs, a 33-year-old Minnesota native, began huffing her gear out to popular plinking spots in March to document her subjects. The Arizona State University graduate student’s preferred camera is a bulky, Civil War-era tintype model, which creates an image by projecting light onto a piece of chemical-coated metal.

Tintype images became popular during the 1850s, when it was common for soldiers to pose for portraits with their weapons. Wehrs’ twist on the antiquated process includes the provocative step of asking her subjects to take aim at their likeness.

The Trace spoke with Wehrs about her motivation for the project and the discussions she hopes it will start. 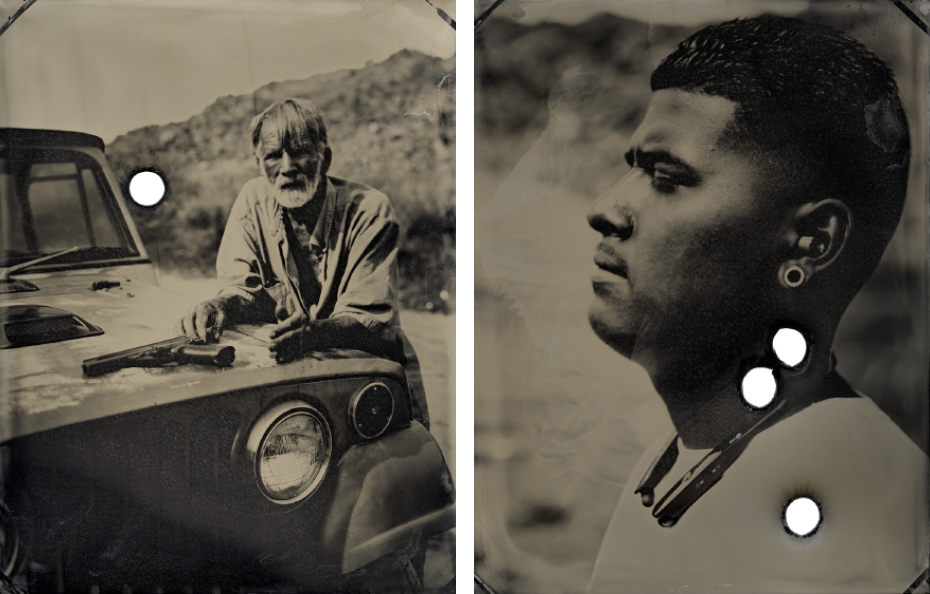 What inspired this project?

I think the topic was already on my mind. When you move to Arizona, gun culture pops into your mind as a reference — there’s almost this Wild West mentality, and the state’s gun laws are some of the least restrictive in the county.

But one of the biggest events to inspire me was when a close relative told me that she’d been carrying a gun for the past few years. She says she does it for self-protection, like when she goes out alone at night. She’s someone who has never had an incident where she would need a gun, and definitely doesn’t live in a city with crazy amounts of crime.

Learning about my relative’s gun made me feel really upset at first, but then that shock and anger turned into curiosity. That was the push, and I just started.

Can you explain what a tintype photograph is, and what making one entails?

It’s very time, chemical, and labor intensive. First, I need to find a place where people are known to target shoot and set up a tent in the desert — my dark room. Then, when I have a subject, I take a piece of aluminum, an aluminum plate, and coat it with a chemical called collodion. The plate is placed in a bath of liquid silver nitrate and quickly loaded into the camera. At this point I already have the subject ready to go because it has to happen very fast. I have only about five minutes to process the plate once it’s out of the bath because of the heat and dust.

After I take the image, I rinse the plate in a different bath of chemicals, rinse it once more, let it dry, and show it to the the subject. Then I ask if they are then willing to use it as a target. How do you approach your subjects?

I try to get to the locations before anyone else is there.

As soon as someone shows up to shoot, I let them get settled in, then introduce myself. I tell them I’m working on a project about gun culture. I usually have an example of a tintype to show them. They either turn me down or they say yes. In most cases, they’ve said yes.

Sometimes they get into it as almost a game. It’s another target for them. Some people are slightly hesitant, in the sense that they know that I’m asking them to shoot their likeness. But I think, in a lot of cases, they look at it as a point of pride — they are out with guns, using their freedom. Let’s talk more about the part where you ask your subjects to shoot their own portraits. What’s the idea behind that? It’s certainly provocative.

Asking people to shoot their likeness potentially asks them to think about guns in a different way, or more importantly, asks any viewer of this project to think about guns in a different way. You just used the word provocative, which is something that I kept saying to myself. How do I provoke — but still leave my work open enough? As an artist, that’s been a big concern for me. I don’t want to automatically feel like I’m shutting out half of the potential viewers. We get enough of that already. What’s surprised you the most?

Guns are such a political topic, and I think people want to say they’re either very far left or very far right on the issue. But I’ve found it surprisingly easy to just have conversations, and to tell people — who might think the complete opposite of what I believe — my feelings, and establish an understanding. I’m very thankful the participants have been so open.

I’ve also been surprised by how this experience has changed my feelings about guns. The gun is a symbol of something else. It’s a symbol of fear and control and competition, and yet it’s also a symbol of freedom and independence. I think this project started out of my own fear. I’ve never shot a gun. But that will now likely change — I’m considering taking a class.

Do you see any kind of parallels between shooting and photography?

I do in some sense, because photography oftentimes tries to control. The desire to make a picture is to stop time. The gun is the same. It’s taking aim at something. It’s conquering something. It’s capturing it. There are probably other larger parallels, but I am still figuring out a lot of things about this world. 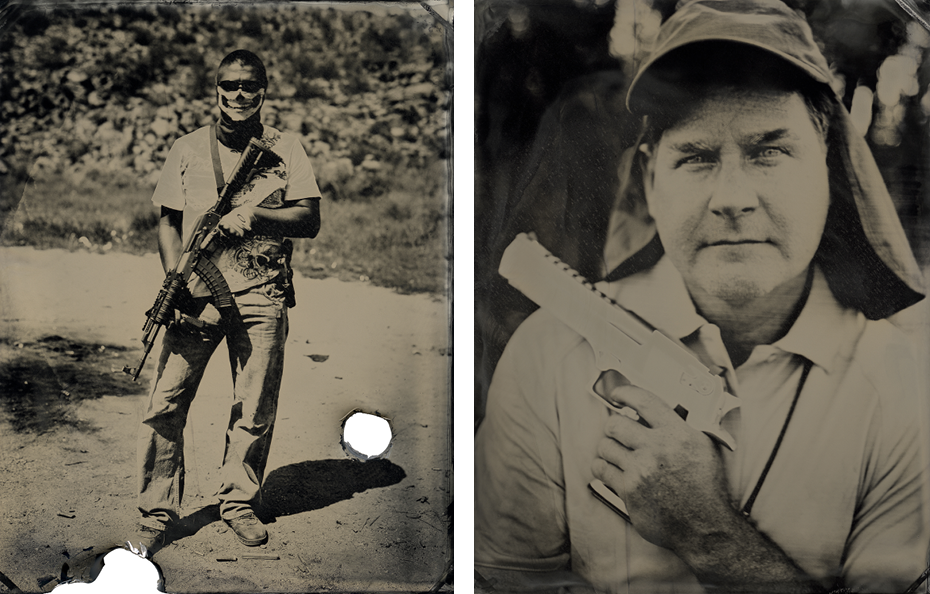 A survey of evangelical leaders now making the…

Vote Democrat, Love Guns? There’s a Group For You, Too.

At the World Series of Competitive Shooting, Politics Are (Mostly) Left at the Gate

The Civilian Marksmanship Program's signature event is a haven for self-described ‘gun nerds.‘

Bullets Travel at 1,700 Miles Per Hour. These Stunning Images Capture What Happens After Impact.